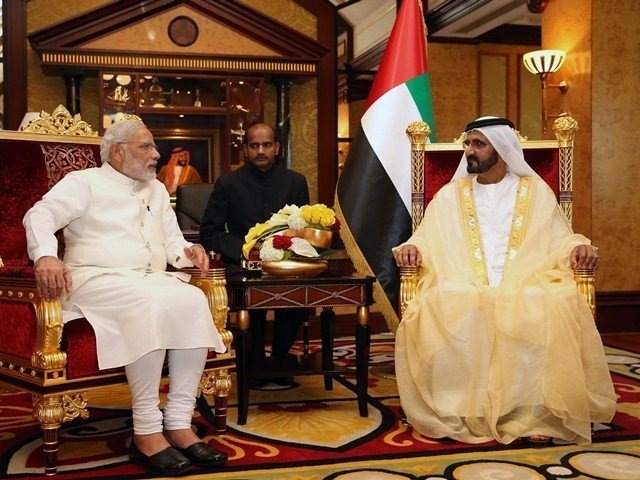 New era has begun in  the Indo-UAE relation as the Indian Prime Minister Narendra Modi arrived at Abu Dhabi on a two-day official visit which began on 10th of February 2018. Modi was welcomed at the airport by His Highness Sheikh Mohammad Bin Zayed Al Nahyan, Abu Dhabi Crown Prince and Deputy Supreme Commander of the UAE Armed Forces, other Sheikhs and senior officials. This is the Prime Ministers second visit to UAE after his first visit two and a half years before in 2015.

The Highlights from the visit of Indian Prime Minister

Sheikh Mohammad took it to twitter to share photos of leaders embracing each other and exchanged greeting and welcome note stating: “The visit reflects our long-standing historical ties and is testament to our friendly bilateral relationship. Dr Anwar Mohammad Gargash, Minister of State for Foreign Affairs stated how eminent the Indo-UAE relation is and it is once again retold for the future. A bilateral meeting was held  with leaders at the Presidential palace in Abu Dhabi and Modi was the first leader to be the guest to the recently instigated Presidential Palace. Agreements which were of high significant value for both the countries were signed, the agreements and Memoranda of understanding (Mou) consisted of nine, out of which the very most pertinent ones were of energy and manpower sectors. Four MoUs between private institutions in both countries were signed on Thursday and Saturday, a set of 5 chief deals were signed at the presence of Modi. One of the agreement of prime value included India’s participation in oil exploration in the UAE. As soon as the agreements were signed and bilateral talks got over, Sheikh Mohammad hosted a banquet in honour of Modi. Modi also attended World Government Summit in Dubai for further meeting with His Highness Shaikh Mohammad Bin Rashid Al Maktoum, Vice-President and Prime Minister of the UAE and Ruler of Dubai.  Shaikh Mohammad Bin Zayed visited India twice in between the years 2016 and 2017. The ongoing interactions have contributed to a strong bilateral relation and strategic partnership between both the countries.

The Indo-UAE relation is a  model for several counties as both counties forging strong bilateral ties and mutually progressing on similar developing ideologies. The high engagement of both countries on various level such as business, diplomatic and political is creating a significant impact. Both countries thriving on similar ideas have them implementing several developing policies and projects.  As the economy of both countries are expanding further, there is a mutual eagerness to diversify and ease bottle necks. The most important part to be noted is by 2030, Asian economies like India will dominate the top-10 chart for having the highest Gross Domestic Product (GDP).